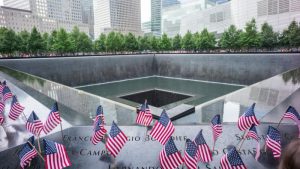 Nearly 20 years ago, the attack on the World Trade Center seemed like the greatest world-shattering event people would experience in their lifetime. Two planes piloted by hijackers slammed into the Twin Towers, killing nearly 3000 people, bringing down the two buildings and spreading cancer-inducing dust into the lungs of thousands of first-responders. For many Americans — especially New Yorkers — the devastation was unlike anything this country had ever seen and prompted 20 years of war in the Middle East.

Then came the coronavirus, Covid 19, the ultimate disrupter, which has overshadowed in many ways, how one world-shattering event changed our lives because this cataclysmic event had such global ramifications.

Accordingly, it has also disrupted remembrances for 9/11 this year. After months of being shuttered, the 9/11 Memorial & Museum is reopening but there was doubt as to whether the annual remembrance would take place as it had been for the last two decades. So it is holding a COVID-conscious observance using pre-recorded audio of family members reading the names of loved ones rather than the usual live readings.

When the 9/11 Memorial announced that it would also cancel its Tribute In Light — where beams are shined into the sky to resemble the Twin Towers — it raised hackles and stirred the bile. Officials said the tribute would put stagehands and electricians needed to install the 88 lights at risk. But, in response to a national outcry — which embarrassed former Mayor Michael Bloomberg — who chairs the 9/11 Memorial — and Gov. Andrew Coumo, the 9/11 Memorial then agreed to erect the lights after all, suddenly saying it could be done safely.

Meanwhile, the Stephen Siller Tunnel to Towers Foundation — which organizes an annual run to raise money for 9/11 survivors and first-responders — decided to feature live readings in a separate, simultaneous event a short distance from the Ground Zero memorial. Its ceremony takes place at the corner of Liberty and Church streets, next to Zuccotti Park — where the victims’ names were read aloud before the ceremony was moved to the 9/11 memorial in 2014.

Both events will ring bells and observe six moments of silence at the exact times when the hijacked planes crashed into the Twin Towers, the Pentagon, and in Shanksville, Pa., and when each tower fell. 297 family members volunteered with Siller to read the names live.

Traditionally, the 9/11 Memorial and Museum has chosen the readers of the names of 2,983 men, women and children killed on 9/11, along with those who perished in the 1993 WTC bombing. But now we have these recordings — to be piped into the memorial plaza — originally produced to be played in the museum’s “In Memoriam” exhibit, which displays photos of the victims.

The memorial has invited 6,100 family members to attend its ceremony; all will be required to wear masks and maintain social distancing. So even with the occasion of recalling 9/11, the pandemic trumps terrorism.

All this brouhaha proves that this global assault has restructured our way of life in a fashion that the localized tragedy of the Twin Towers attack could never do. And because of that, we now have to find a way to restructure our lives in ways we never could have expected in 2001. Maybe the hope that we would become so much better people after 9/11 — which didn’t seem to have happened — will finally come into play thanks to the world having slipped into the Corona-verse.

Suzanna BowlingNovember 12, 2021
Read More
Scroll for more
Tap
T2C Remember’s 9/11 and a Time Our City Came Together
If You Are Protestor in NYC There Are No Rules!