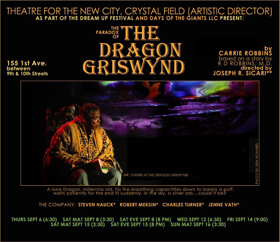 The Dragon Griswynd, a new play by Carrie Robbins – the playwright and Tony-nominated costume designer – will be presented at Theatre for the New City (155 First Ave.) in the East Village this summer, with performances scheduled September 6-16 as part of TNC’s Dream Up Festival. Directed by Joseph R. Sicari, with original music by Scott Munson, The Dragon Griswynd, stars Charles Turner as the dragon.

Mr. Turner’s numerous Broadway credits include having performed as understudy to James Earl Jones in You Can’t Take It With You, The Gin Game and n Golden Pond, as well as in The Trip To Bountiful with Cicely Tyson.  He appeared in last season’s hit revival of The Little Foxes, and can soon be seen in “If Beale Street Could Talk,” an adaptation of a story by James Baldwin directed by Barry Jenkins (director of the Oscar-winning “Moonlight”), which is currently an entry in the NY Film Festival.

Joining Mr. Turner in the cast of Griswynd are Jenne Vath (The Diamond Eater) and Steve Hauck (Unbreakable Kimmy Schmidt).

In The Dragon Griswynd, Mr. Turner portrays the title character, the last (dragon) of his kind on earth, who lives alone in an extinct volcano, high above a dying world.  Desperate for companionship, he begs unexpected visitors to stay with him, or at least take him with them.

The play – poignant and playful – depicts a once mighty figure, like Earth itself, facing mortality.  Ms. Robbins adds that the play is meant, “to be a meditation on loss and loneliness – the loneliness that comes with old age, old fangs, weak wings.”

As a costume designer, Carrie Robbins has designed 31 Broadway shows, most recently White Christmas.  She was nominated for the Tony Award for her designs for Over Here! And Grease.  She is a Drama Desk Award winner, and the recipient of the TDF/Irene Sharaff Lifetime Achievement Award.  Her plays include Sawbones and The Diamond Eater (HERE – 6 NYIT Award nominations), which was also a semi-finalist in War + Peace/ 2018-19 season (Theater at the 14th St. Y), and finalist for THE ACTRESS (NYThespis Festival).

Joseph Sicari has directed productions in Los Angeles of Plaza Suite (with Mike Farrell, Bonnie Franklin), The Sunshine Boys (with Harold Gould) and The Price (Barbara Bain).  In NY he’s directed Music Minus One starring Leslie Uggams, and DA DA with Ellen Stewart at La MaMa.

Scott Munson won the NY Innovative Theatre Award for his score for Sawbones and The Diamond Eater at HERE.

The Dragon Griswynd will perform, as follows: